Driving to the Walt Disney World theme parks can be quick and convenient, and if you stay at a Disney resort, you don't have to pay the parking fee-which for cars is currently $14 per day!  One thing you'll want to do if you decide to drive yourself instead of taking Disney resort transportation is to remember where you park.  The parking lots for the WDW theme parks are HUGE.  The Magic Kingdom's lot at the Transportation and Ticket Center is one of the largest in the world and can hold more than 12,000 cars.  Epcot's lot holds over 11,000; Disney's Hollywood Studios and Animal Kingdom hold over 6,000 each.  And if you happen to visit on a very crowded day, forgetting where you parked your car can turn your fun vacation day into a nightmare.

WDW's parking lots are all named and numbered.  For example, Animal Kingdom's lots are named after animals (well, that should have been obvious, right?), such as Unicorn, Butterfly and Giraffe.  At Disney's Hollywood Studios, you could be parking in lot called Film or Television, at Epcot there's Create, Discover, Amaze and more.  Examples from the Magic Kingdom include Peter Pan, Ursula, Woody and Zurg.

If you have a pen and paper, you could write down where you parked.  Many guests save the information in their cell phones.  My favorite tip, though?  Take a picture-preferably with your cell phone, especially if your regular camera doesn't have a screen to view your pictures (the picture you took with it would be kind of worthless then LOL): 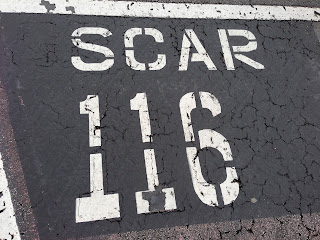 This will make it a lot easier at the end of the day to locate your car-unless you really feel like you need the extra exercise ;-)

An extra tidbit about the Magic Kingdom's parking lots...they are divided between the "Heroes" lots and the "Villains" lots.  Heroes include Peter Pan, Rapunzel, Aladdin, Woody, Mulan and Simba.  Villains include Cruella, Ursula, Jafar, Hook, Zurg and Scar.  This is important because there are two separate tram lines depending on where you parked.  If you parked in one of the Heroes lots and you get on the Villains tram, well...you're not going to get to your car and will have to ride the tram back to the Transportation and Ticket Center, then get on the Heroes tram instead.  A bit confusing if you're not paying attention, so just keep this in mind when you park as well.

If you forget where you parked and can't find your note, deleted your photo or something else happens, you can flag down one of the Disney security vehicles that patrol the lots for assistance.  If you can provide the time that you arrived and parked, they may even be able to help narrow down the search for you to a particular lot that was being filled at that time.

Have you ever forgotten where you've parked at Walt Disney World's theme parks?  What's your favorite tip for remembering your lot and row?
Posted by Making it Happen at 10:15 PM