You may know that there is a popular pastime for adults while at Epcot known as “Drinking Around the World”.  It involves going from one end of World Showcase to the other, stopping to try an adult beverage (read “alcohol”) in each country-something unique to that country.  Me?  I used to drink alcoholic beverages back in my early 20s but haven’t really touched them in the last 15 years or so (I don’t like how alcohol makes my head feel like I’m detached from the world).  So what’s a non-drinker like myself to do when invited to drink around the world?  Why, turn it into DESSERTS Around the World instead!
Just like with Drinking Around the World, Desserts Around the World works best if you share with others.  That way you can try more desserts (YUM!) and not fill yourself up after just a couple of stops.  Everyone has their favorites-chocolates, frozen desserts, pastry-type desserts and so on.  Here’s my personal picks for desserts in each country:
Mexico-I’m a sucker for a churro.  Fried dough covered in cinnamon sugar?  Sign me up!
Norway-School Bread-A yummy sweet bread/roll with vanilla custard inside, then topped with icing and toasted coconut.  It’s not super-sweet but is just right and a really yummy snack (and it will fill you up pretty well if you eat the whole thing by yourself).
China-Cinnamon Apple Egg Roll-Egg roll exterior, but the inside is filled with cinnamon-sauced apples.  Yum!
Germany-OMG...can you say “caramel”?  Germany’s Karamelle-Kuche shop has all sorts of yummy caramel desserts-from caramel applies to hard caramel candies.  My favorites (right now-I LOVE caramel so these choices can change pretty quickly as they introduce new desserts) are the caramel-marshmallow pinwheel (try sucking on it after putting it in the refrigerator for a while!) and the chocolate cookie with caramel filling (also has caramel drizzled on top).
Italy-I may be the odd one out here, but I prefer raiding the chocolate candies from the store out front (right hand side as you’re looking at the pavilion-Delizie Italiane).  But then again, when I eat a meal in Italy’s restaurants, there’s never any room left for dessert.
United States-okay, this is a toss-up.  Traditional?  Gotta go with the funnel cake at the funnel cake kiosk.  Fried dough topped with powdered sugar?  Perfect!  My other choice here is at the Liberty Inn counter service restaurant-the S’Mores Mousse Brownie--and yes, it’s as good as it sounds!  When I first ordered it I was wondering just how bad could a counter service dessert be?  And then I took a bite...and devoured the rest without offering to share with anyone.  Good thing my friends had ordered one as well.
Japan-Kaki-Gori...basically a sno-cone though this is called “shaved ice”.  Love the strawberry flavor.
Morocco-I can honestly say I’ve never had a dessert from Morocco.  I’ll have to remedy that by stopping in to the cafe to see what’s available.  I’m not a baklava fan...anyone have a dessert favorite in Morocco for me to try?
France-hmm, desserts in France...with Boulangerie Patisserie, how can you pick just one?  Everything I’ve tried there so far has been delicious.  If I had to pick a favorite, I’d probably go with the Creme Brulee, followed by the Chocolate Mousse...and Chocolate Eclair...oh and the Cream Puff.  But a tip for those of you who will be in Epcot during the Food & Wine Festival--get your Creme Brulee at the F&W kiosk instead.  It’s not just regular Creme Brulee--it’s MILK CHOCOLATE Creme Brulee!  Oh YUM!
United Kingdom-another country I haven’t had a dessert in, though I’ve heard the Sticky Toffee Pudding at the Rose and Crown is pretty tasty.  Adding that to my list of desserts to try this fall.
Canada-For me, Disney disappointed me when they removed the Beaver Tail kiosk from Canada.  Beaver Tails are fried dough in the shape of a beaver tail, topped with your choice of maple and chocolate, strawberries and whipped cream, apples and cinnamon, chocolate hazelnut and sugar...and my favorite-cinnamon and sugar.  Unfortunately, the kiosk has been gone for many years and every time I pass by I lament this fact.  Fortunately, Le Cellier has MAPLE Creme Brulee.  Unfortunately Le Cellier is now a Signature Dining restaurant and is still pretty expensive so no maple creme brulee for me...at least not every trip.
Have you ever tried doing Desserts Around the World? Which are your favorites? 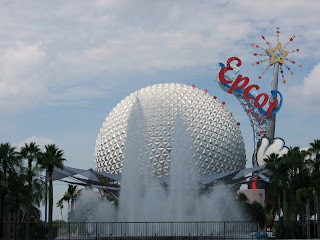 Posted by Making it Happen at 7:02 PM