The Magic Kingdom is Walt Disney World’s oldest resort, opened in 1971. It consists of six different areas or “lands”-Main Street, USA; Tomorrowland; Fantasyland; Liberty Square; Frontierland; and Adventureland. The lands are situated around the hub of Cinderella Castle, the layout most often compared as spokes of a wheel with the area in front of the castle being the center.

When you first enter the park, you will find yourself on Main Street, USA. It is set up to look like a Main Street in a typical small town with shops lining the street, City Hall, Chamber of Commerce, old-fashioned vehicles like a horse-drawn trolley and restaurants. There’s also the Walt Disney World Railroad station where you can board an open-air train for a ride around the entire park with stops in Frontierland and Fantasyland. Most of the shops are connected to each other so you can easily walk from shop to shop down the street. You’ll find your traditional Disney souvenir shop with shirts, hats, stuffed toys, etc, but you’ll also find sports-themed merchandise, confectionery items, baked goods, crystal and much more...most with a Disney flair of course.

If you head over the first bridge to your left before you reach the hub in front of Cinderella Castle, you’ll be heading into Adventureland. Adventureland is themed kind of like a tropical jungle area in some spots and like a mid-east desert bazaar area in others. Here the attractions you’ll find are the Swiss Family Treehouse, Jungle Cruise, The Magic Carpets of Aladdin, the Enchanted Tiki Room and my one of my favorites-Pirates of the Caribbean. There is also the Pirates League, a place where you can become a pirate yourself. They also currently have a Mermaid package available.

Continuing on from Adventureland you’ll cross over into Frontierland, a wild west American pioneer-type town. Here you’ll find an old-time shooting arcade, the Country Bear Jamboree, Tom Sawyer Island and two of the Magic Kingdom’s three mountains-Splash Mountain and Big Thunder Mountain. Here you can enjoy a roller coaster, cool down on a water flume ride and explore an island playground...and then munch on those giant turkey legs you’ve heard so much about...and a churro or Mickey Mouse shaped pretzel for dessert!

Keep going through Frontierland and you’ll eventually happen upon Liberty Square. It is set up to look like something out of colonial America, complete with a replica Liberty Bell. This is the one land in the Magic Kingdom with the least going on attraction-wise. There’s the Hall of Presidents (which by the way is a great way to relax out of the Florida sun for a bit-and these guys are unbelievably real looking), the Liberty Square Riverboat (another nice way to relax while sailing around Tom Sawyer Island on a paddlewheel boat) and another favorite-The Haunted Mansion.

Next up-every kid’s dream place-Fantasyland. Lots of rides, all of which will make you feel like a kid again! Dumbo the Flying Elephant, the Barnstormer, It’s a Small World, Peter Pan’s Flight, Prince Charming’s Regal Carrousel, the Mad Tea Party, Snow White’s Scary Adventures, Winnie the Pooh and Mickey’s PhilharMagic. With the recent Fantasyland expansion, Dumbo and Barnstormer are part of the new area that has started to open up. Just working your way through Fantasyland will take quite a while...the attractions here are among the most popular, especially with Disney’s youngest visitors. You can fly through the air, spin round and round in a teacup, bounce and glide your way through the Hundred Acre Wood-enjoy the best of Disney’s classics.

Last but certainly not least as we complete the circle around the Magic Kingdom is Tomorrowland. Fly high in the air on the Astro Orbiter, shoot through space on a rollercoaster on Space Mountain, help fight the evil Emperor Zurg on Buzz Lightyear’s Space Ranger Spin, race around on the Tomorrowland Speedway, have an alien encounter at Stitch’s Great Escape, enjoy a a monster-sized comedy show at the Monsters, Inc. Laugh Floor, experience our progress from turn of the century (the twentieth century) to present-day technology on the Carousel of Progress, or relax as you travel around all of Tomorrowland on the Tomorrowland Transit Authority (or as us Disney veterans call it-the WedWay Peoplemover-it’s original name).

In addition to the great attractions, there’s also some great parades and of course a fantastic fireworks show. First we have the Move It, Shake It, Celebrate It street party. It happens several times a day and you can dance with the characters after their floats stop around the hub in front of Cinderella Castle. There’s also the Celebrate a Dream Come True Parade with great floats, Disney characters and music. Both of these happen during the daytime. For a real treat though, make sure you stay after the sun goes down for the Main Street Electrical Parade...all your favorite characters, lights and infectious music make for a parade experience you’ll never forget. And you can’t leave before watching the Wishes Fireworks show-the biggest fireworks display that shows at the Magic Kingdom almost every night. For an even more magical way to experience Wishes, consider attending the Magic Kingdom’s Fireworks Dessert Party-a self-serve buffet of delicious desserts with prime seats for the fireworks show.

You could try to do all of this in a single day...but to really experience everything in the Magic Kingdom without running around like a chicken with your head cut off, you may want to reserve two full days so you can really enjoy yourselves. Also, please note that some attractions-like the three mountains, Barnstormer and the Tomorrowland Speedway-have height requirements before you can ride for safety reasons.

So that’s an overview of the attractions you’ll find at the Magic Kingdom...there’s more, with restaurants, shopping and character meet-and-greets but I’ll be posting more information in other posts on the main page. 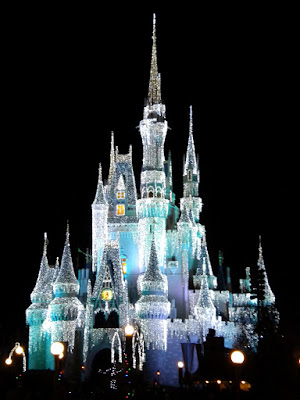