Mickey's Not So Scary Halloween Party

Traveling to Walt Disney World in the Fall is a great time of year. Temperatures and humidity start to drop (well, at least a bit) making it less of a sweat-fest (especially at night)...plus there’s all sorts of fun events going on. My favorites are The Epcot Food and Wine Festival (which I’ll post about soon) and Mickey’s Not So Scary Halloween Party at the Magic Kingdom (MNSSHP for short). This year, the Halloween Party is being offered on select nights between 9/11/12 and 11/2/12. On nights the party is held, the Magic Kingdom closes early to regular guests, then from 7pm until midnight opens for party guests to enjoy the festivities. *TIP--as long as you have your MNSSHP ticket with you, they’ll actually start letting you in as early as 4pm! 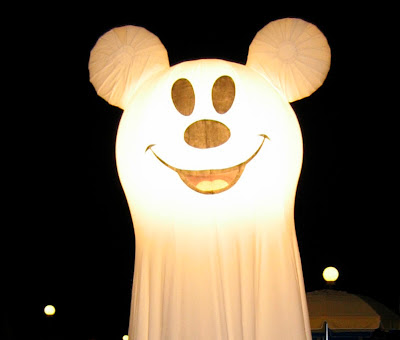 MNSSHP is a separately ticketed event so it is not included with your regular park admission. Depending on when you go, tickets will cost anywhere from $50.95 plus tax for ages 3-9/$55.95 plus tax for ages 10 and up up to $64.95 (3-9)/$69.95 plus tax (10 and up). The earlier in the season you go, the less expensive it will be...the closer to Halloween, the more expensive. Halloween night itself is the most expensive night and always sells out ahead of time...sometimes quite early! If you buy your tickets in advance, it is cheaper for almost every single date as compared to buying them at the park. I do recommend buying ahead of time as many dates do tend to sell out--there are a limited number of tickets available for each party so the park doesn’t get too crowded. After all, that’s one of the perks-smaller crowds so you can have plenty of time to enjoy all of the rides and entertainment!

So what’s there to do during MNSSHP? In addition to the park being decorated for the occasion, how would you like to trick-or-treat your way all around the Magic Kingdom? Candy stations are set up throughout the park, and they even give you a trick-or-treat bag when you enter the party to collect all your loot! And from my experience, the cast members are pretty generous while filling your bag. Run out of room in your bag? They’ll give you another! And you can go through the stations as many times as you’d like. 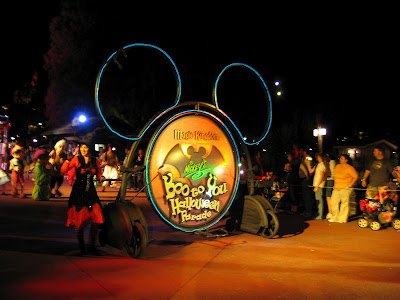 There’s also the “Boo-to-You” Halloween Parade. The parade is shown twice each night...I would recommend the second one since it’s usually much less crowded--you should be able to easily get a curbside spot for the second showing. Of course the parade is Halloween themed...plus, all of the characters are dressed in costumes! Be sure to keep an eye out for the grave diggers! 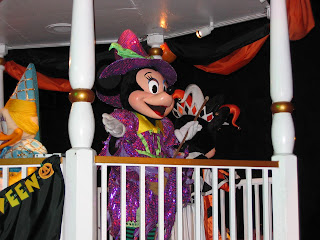 An added bonus...preceding the official parade start (for both showings), the Headless Horseman rides down the parade route! I do lament, though, the early days of the party when he would actually ride through at a gallop. Now he comes through at more of a trot...I’m guessing there must have been some safety issues that came up and so Disney made the change. 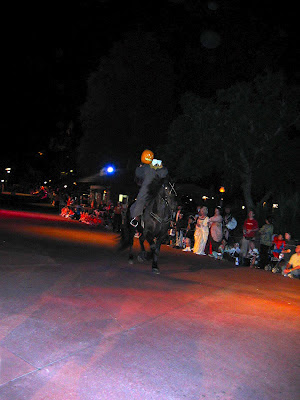 Of course, what would a Disney holiday party be without a special fireworks show? The regular Wishes fireworks display is replaced during the party by the Happy HalloWishes fireworks show. If you though Wishes was amazing, well...think again. *Viewing tip-don’t sit directly in front of the castle as it will block some of the fireworks that go off lower in the sky. Try to find a spot toward the right side of the circle that’s in front of the castle instead.

There’s also special music and lighting throughout the park (be sure to check out Main Street later on in the evening), plus lots of character greetings. And since it’s a special party, you’re going to see characters you would not normally see during a typical day at the Magic Kingdom...like all seven dwarfs at the same time (a very rare occurrence!), Gaston, Lotso, Jack Sparrow(!). Also, there are dance parties at different locations in the park.

And don’t forget--you CAN dress up in costume, and in fact a large portion of the guests who attend the party do dress up. It does add to the fun!

The big question everyone asks-is it worth it? To me, most definitely! Even for me as an Annual Passholder who lives just a few hours away (so I can pretty much visit whenever I’d like), I love going every year. Lower crowds, unique entertainment just for the Halloween holiday, trick-or-treating through the park, special photo opportunities with seldom-seen characters...for me it’s a no-brainer. If you’re heading to WDW for vacation and looking for something “different” but don’t want to miss any time in the parks, this is a great option. You could even save visiting the Magic Kingdom for just the party and not use a day on your park passes--after all, if you get there at 4pm when they usually start letting party guests in and stay until close, that’s 8 hours of time in the park! Best advice--go during the week if you can--weekend parties are a little more crowded and remember, the closer you get to Halloween, the more crowded the parties get.

Don’t forget, if you’re a DVC member, Annual Passholder, etc--check to see if there are advanced-purchase discounts. They usually do offer them each year for the party.

Additional tips:
-Keep checking the weather report for your planned party day. While it usually is still warm at that time of year, you never know...it could wind up being a bit chilly or hot and humid--so especially if you’re dressing in costume, make sure you are prepared (including a poncho if it looks like rain is a possibility)
-Whatever you plan to do during the day, make sure you take a break in the afternoon to rest and relax so you can enjoy the entire party--the longer you can make it during the party, the more you’ll be able to do (without crazy lines!). I usually sleep in a little, maybe visit one of the other parks for a couple of hours, have lunch and a nap (or maybe some time in the pool), a leisurely dinner and then head to the party
-Eat dinner before you head to the party. While several of the restaurants will be open during, why waste time in them when you’re paying extra for the party?
-If you want to get pictures with the Seven Dwarfs, get in line early---like before 6pm. Their line will probably be over an hour long ALL night as it is almost impossible to find them all together at any other time. Jack Sparrow also has long a long wait, though sometimes late in the party as people start to leave you can get lucky with a shorter line.
-As mentioned before, the second parade will be less crowded--a lot of families, especially those with very young children, will leave after seeing the first parade and fireworks show.

If you do go, don’t forget to bring your camera. Between the decorations, parade and characters, there’s lots of great shots just waiting to be taken. The Disney PhotoPass photographers will be available at the party as well.

And most importantly if you decide to go---HAVE FUN!

Have you ever been to Mickey’s Not So Scary Halloween Party at the Magic Kingdom in Walt Disney World? Do you plan on going this year?
Posted by Making it Happen at 4:17 PM