What to do in Disney World when it’s raining

It’s raining, it’s pouring...sounds like we’re about to ride the Tower of Terror, doesn’t it? While whenever I hear those words my brain thinks of the creepy little girl saying it in her haunted little girl voice, I’m sitting here at home right now watching it rain and pour outside my window. It’s one of those days when you hope you don’t have to go out for anything, and if you do you keep watching for a break in the clouds so you can zip out and zip back before the skies open up again. When you’re at home, it’s usually pretty easy to adjust your schedule so you can avoid heading out in nasty weather...but when you’re on vacation you hate to lose any time playing in the parks just because Mother Nature is not cooperating. So, what do you do in Disney World when the skies turn gray and the drops start to fall?
First, you need to understand how Florida rain works. Nine times out of ten you’ll get a quick rain shower, then it will stop for a bit, another quickie, stop, etc. And it usually will not last all day. Most wet weather occurs in the afternoon, especially at the height of the summer when the humidity builds through the morning and peaks after lunch-when it gets so humid the clouds can’t hold it any longer, it all comes falling down-normally between 1pm-5pm(ish). Of course that isn’t always the case, there’s the occasional all-day soaking; but days like that are not the norm. Here’s some ideas for what to do in Disney World when the rain starts up.

Magic Kingdom-Probably the best way to stay out of the rain here is going to be by browsing the shops on Main Street. Most of the stores are connected to each other so you can easily pass from one to the other without having to go outside. Just the Emporium alone at over 17,000 square feet will keep you busy for quite a while. And if you finish on one side of the street, when the raindrops stop for a moment, hop on over to the other side for the rest of the shops. And if you’re concerned about lugging your purchases around with you the rest of the day/night, anyone can have their goodies brought to the package pickup at the front of the park or, if you are a WDW hotel resort guest, delivered to your hotel. You can even have them ship your packages home for you via UPS or FedEx.

You can also grab a bite to eat on either side of the street at Casey’s Corner, the Bakery, the Confectionery or the Plaza Ice Cream Parlor. There’s also the Plaza Restaurant and the Crystal Palace, though you may have to step out from under cover to get to them; plus they take reservations so you might not be able to get in-especially for Crystal Palace since it is a character buffet.

The other areas of the Magic Kingdom are mostly open to the air between the attractions and shops and you’ll wind up running from one place to another in a mostly vain attempt to stay dry.

Epcot-Here you have a couple of options. The one that will let you stay inside for the most amount of time is to duck into Innoventions East or West. With several engaging exhibits for both kids and adults inside both East and West, Innoventions will keep you busy while you wait for the skies to settle down. Food options include the Electric Umbrella and Fountainview Ice Cream.

I also like The Land pavilion as it has several things to do inside-Soarin’, which if you don’t have a Fastpass will kill a lot of time waiting in line; Living with the Land, a 14-minute boat ride; Circle of Life, a 20-minute film; plus you have some great food choices-the Garden Grill restaurant (character dining, reservations strongly recommended so this one’s hard to plan for weather) and the Sunshine Seasons food court (much better than your traditional Disney hotel food courts).

The Seas with Nemo and Friends is also a good choice as there’s a lot to see inside after the ride itself. I can kill a half hour in here pretty easily just looking at all of the ocean life. The Universe of Energy is also a half hour long and you get to sit down in the air conditioning for most of it as well.

The rest of the Future World pavilions only get you out of the rain for as long as the ride lasts, and getting from one World Showcase pavilion to another will test your ability to stay dry (though depending on your interest in a particular country and what is offered at each country you may be able to stay there for quite a while-like Mexico with its ride, shopping and some dining all inside the pyramid).

Disney’s Hollywood Studios-Like Magic Kingdom, DHS has shopping opportunities down Hollywood Boulevard, the main entrance street at the front of the park. Though it won’t kill as much time as shopping on Main Street in MK will, there’s plenty of merchandise to go through here. For rides, The Great Movie Ride is around 20 minutes, plus any time you spend waiting in line so it’s a good way to duck out of a downpour for a bit. There’s also The Magic of Disney Animation which is also 20 minutes long, plus there’s an interactive section and a character meet-and-greet area. In addition, you can do the Animation Academy class (offered every half hour) where you can learn to draw a Disney character...though on rainy days this class can have long waits since lots of people are looking for ways to pass the time until the rain stops.

Animal Kingdom-most attractions here are out in the open. One exception is Rafiki’s Planet Watch. You do need to ride the Wildlife Express train to get there and walk from the train station to the building, but once inside there’s plenty to see and do, enough to keep you busy for quite a while, especially when they bring animals out.

While most of the rest of Animal Kingdom is open to the elements, there is a lot of tree cover so if you’re willing to don a poncho or use an umbrella, you can still have a good time here. Many of the animals become more animated in the rain, especially during a good thunderstorm. You may be surprised at their antics. Also, a good outdoor ride for the rain here is Kali River Rapids. You’re going to get totally soaked on the ride anyway, so what does it matter if it’s raining?

What if the entire day is going to be a soaking mess? This scenario happens less often, but even if this is the case, don’t let it ruin your day! Going to the parks is still an option if you don’t mind possibly getting wet...a good poncho, some sturdy waterproof shoes and/or an umbrella will let you wander the parks and still enjoy many of the attractions. A bonus--many guests will avoid the parks while it’s raining and hole up somewhere else so you may find the wait times for rides is considerably less (unless it’s the height of peak season and everyone is determined to be in the parks no matter what, but then you’re going to have long lines anyway-rain or shine).

Another option if you’d really rather stay dry is DisneyQuest or the AMC theater at Downtown Disney’s West Side (or both). A movie will give you at least a couple of hours for the rain to stop. And DisneyQuest, especially if you have kids, you could easily spend at least a half a day, probably more. There is the additional cost (currently from $37-$43 per person) but if you and your family are fans of interactive gaming, it will certainly keep you busy and you’ll have a great time. Plus you can have a leisurely morning before you go since it doesn’t open until 11:30am. There’s food there as well so you can enjoy a meal while taking a break from the games.

Something else to try-the resort monorail line at the Magic Kingdom. Use the monorail to hop from the Contemporary to the Grand Floridian to the Polynesian and check them all out-especially around the holidays when the hotels are decorated so beautifully.

The point is, don’t let the weather dictate how much fun you have on your trip. You’re at Disney World after all...go ahead, feel like a kid dashing through the raindrops in the happiest place on earth! I recommend keeping a poncho and/or umbrella handy in your backpack/purse/whatever your using to carry your stuff around so you can just keep going no matter which park you are in. Eventually the rain will stop, so why not just go with the flow?

What do you like to do at Disney World when it rains? 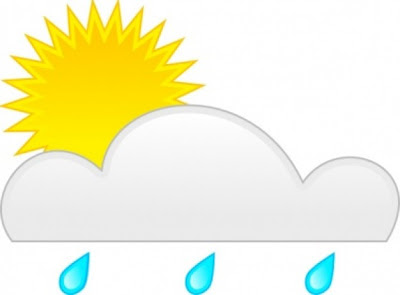 Posted by Making it Happen at 9:39 PM